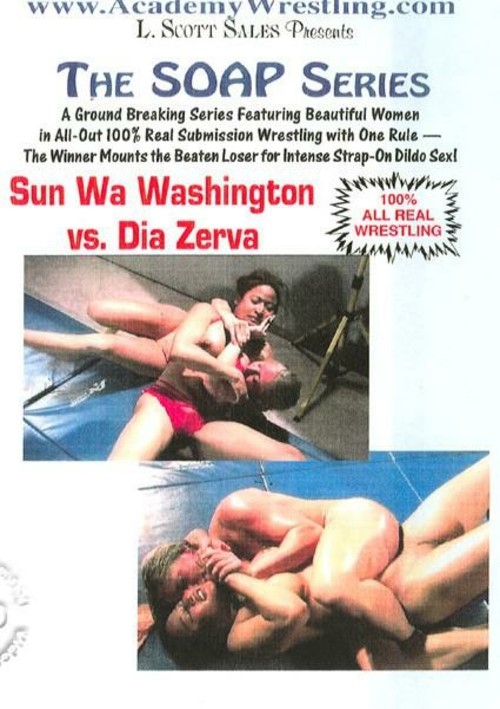 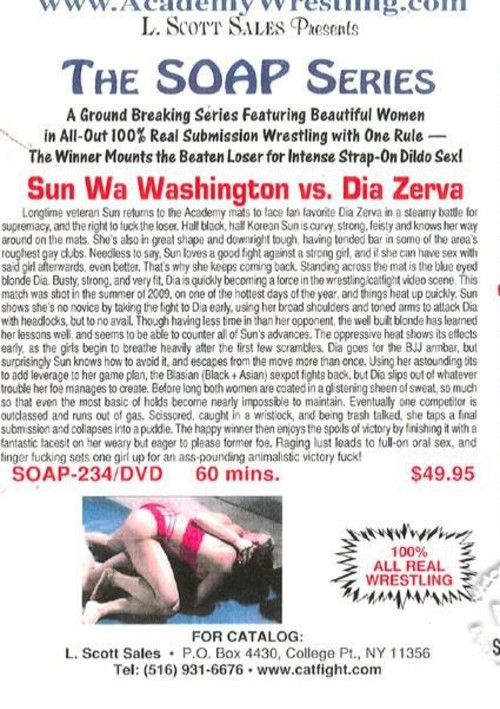 Sun Wa Washington Vs. Dia Zerva
These ladies display intense passion during battle! Longtime veteran Sun returns to the Academy mats to face fan favorite Dia Zerva in a steamy battle for supremacy-and the right to fuck the loser. Half black, half Korean Sun is curvy, strong, feisty and knows her way around on the mats. She's also in great shape and downright tough, having tended bar in some of the area's roughest gay clubs. Needless to say, Sun loves a good fight against a strong girl, and if she can have sex with said girl afterwards, even better. That's why she keeps coming back. Standing across the mat is the blue eyed blonde Dia. Busty, strong, and very fit, Dia is quickly becoming a threat in the wrestling/catfight video scene. In case you've been under a rock, she has been wrestling up a storm for the last couple years, and like the other top girls in the genre has begun training "for real" with the cameras off. This match was shot in the summer of 2009, on one of the hottest days of the year, and things heat up quickly. Sun shows she's no novice by taking the fight to Dia early, using her broad shoulders and toned arms to attack Dia with headlocks, but to no avail. Though having less time in than her opponent, the well built blonde has learned her lessons well, and seems to be able to counter all of Sun's advances. The oppressive heat shows its effects early, as the girls begin to breathe heavily after the first few scrambles. Dia goes for the BJJ armbar, but surprisingly Sun knows how to avoid it, and escapes from the move more than once. Using her astounding tits to add leverage to her game plan, the Blasian (Black + Asian) sexpot fights back, but Dia slips out of whatever trouble her foe manages to create. Before long both women are coated in a glistening sheen of sweat, so much so that even the most basic of holds become nearly impossible to maintain. Eventually one competitor is outclassed and runs out of gas. Scissored, caught in a wristlock, and being trash talked, she taps a final submission and collapses into a puddle. The happy winner then enjoys the spoils of victory by finishing it with a fantastic facesit on her weary but eager to please former foe. Raging lust leads to full-on oral sex, and finger fucking sets one girl up for an ass pounding animalistic victory fuck!